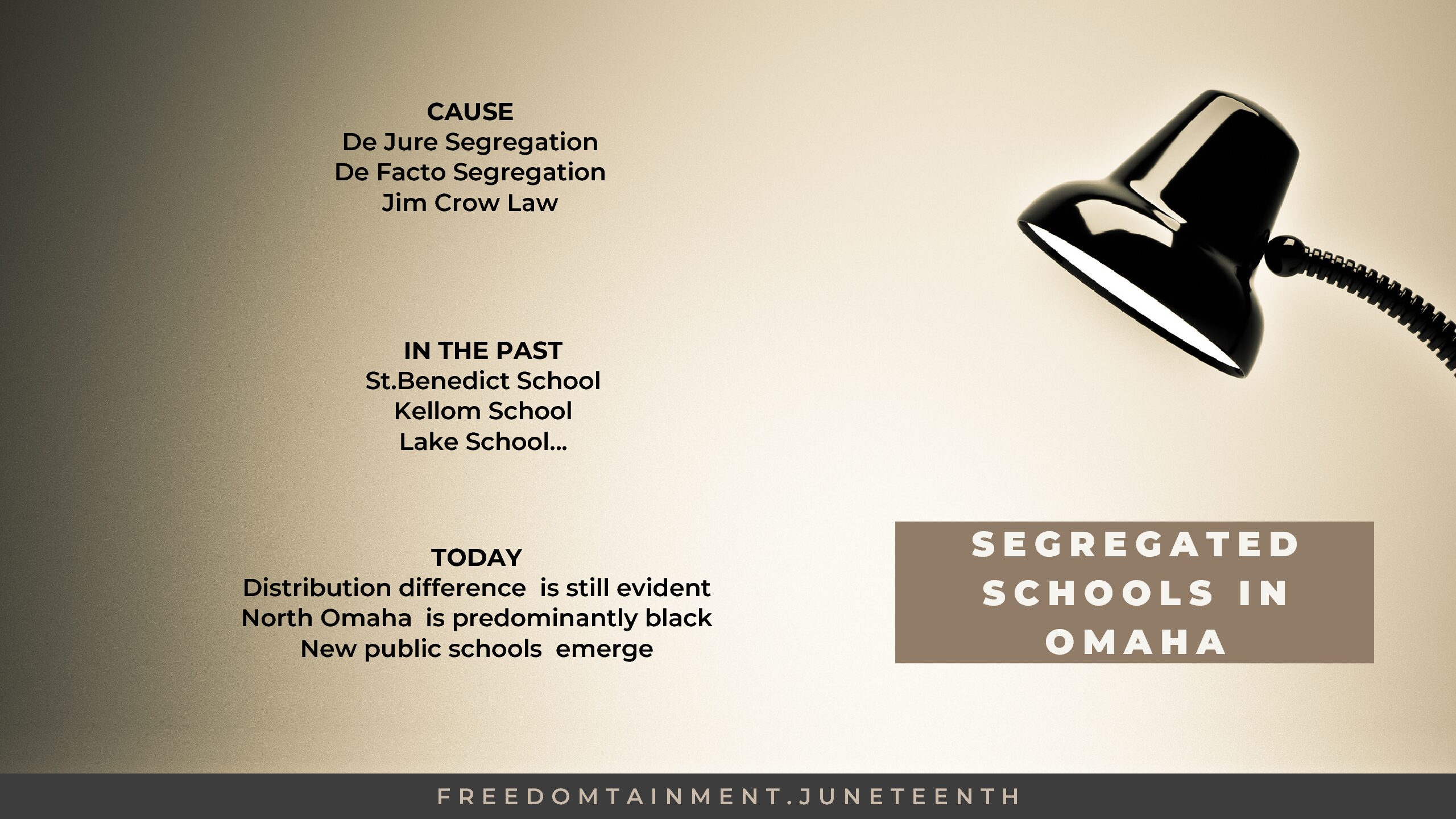 Segregated schools carried a long story in the history of America. Ever since the Jim Crow Laws started, education in the black communities has been significantly impacted till today. This Blog will introduce a brief history of Omaha Black Schools and how it is doing today.

Cause of the Segregation in the Past

As Adam Fletcher Sasse pointed out, there were three main reasons that caused the segregation in education in Omaha. First, de Jure segregation, which means laws provided separate schools for students according to their race. Second, the distribution of ethnicity in Omaha Public Schools was de facto segregation, which meant that the segregation was determined by culture, traditions, opinions, and attitudes. Third, Jim Crow Law, which intentionally separated black and white by race.

Segregation Schools in Omaha throughout the History

There are several black schools throughout history. Here I will give some well-known examples.

St.Benedict School was a product of du Jure segregation. It was built by a Catholic Father named Francis Cassilly in 1923 to serve local black students. However, due to many reasons, the school was closed after 45 years of serving north Omaha black community. (St.Benedict School history  HYPERLINK “https://northomahahistory.com/2017/05/06/saint-benedict/” https://northomahahistory.com/2017/05/06/saint-benedict/) Kellom School was built in 1870 and was named Paul Street School back then. As more black and white students came in, the school had to be rebuilt and changed its name to Kellom School. Kellom School was the largest school in Omaha city in 1908. However, under the pressure of the white fight, it finally became a segregated school for black kids. Lake School was founded in the 1880s. Before it turned into a compete segregated school for black kids in 1865, many white kids attended the school.

Due to the Supreme Court Order in 1991, Omaha Public School has resegregated, but the distribution difference between the white students and black students is still evident. Data shows that while Millard has about 80% of white kids (The Landscape.  HYPERLINK “http://www.thelandscapeomaha.org/Education/Education-Demographics” http://www.thelandscapeomaha.org/Education/Education-Demographics ), north Omaha region is predominantly black students. As the population in Omaha keep expanding, some people move to the edges of the city, which lead to new public schools to emerge, like Elkhorn Public Schools, Bennington Public Schools, Ralston Public Schools, etc.

The stories of segregated schools in Omaha reflects the history of the black community in America. The adoption of segregated schools not only caused barriers between races back then but also left its impact on our society till today. While many people drive through north Omaha, yet not many of them know the segregation history of its schools. Freedomtainment(http://www.freedomtainment.com/ ) is a local non-profit business that is dedicated to educating the history and culture of north Omaha community through different channels, like Omaha Freedom Festival(https://www.omahafreedomfestival.com/ ). The event is once a year and it is scheduled this year on June 19th, 2021 to celebrate Juneteeth Holiday (https://en.wikipedia.org/wiki/Juneteenth ) under the safety guidelines of CDC. We encourage you to join us and learn a little more about the north part of our own society.