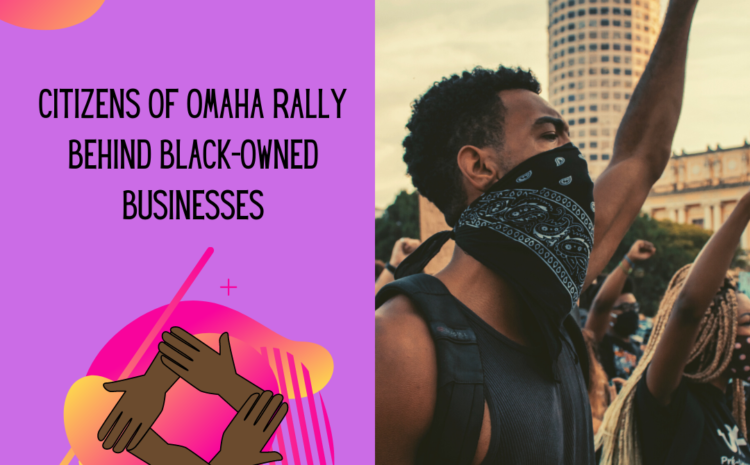 By: Josiah Kaufman, A Student at the University of Nebraska at Omaha, as part of Heather Nelson’s Service Learning Academy class.

The summer of 2020 saw an emergence of activism against racial injustice across the United States. Omaha certainly did not stand idly by as protests arose in the streets advocating for justice and police reform. However, this was not the only way that the people of Omaha stood up for each other during times of adversity. Since the summer of 2020, black-owned businesses have seen a surge of support from Omaha communities, as buyers use their spending power to uplift businesses facing adversity and representing their beliefs. As many black-owned businesses are already on a push to gain more representation in their community and compete as a minority group, the effects of COVID-19 were especially impactful for small black-owned businesses. In support of a marginalized community impacted by both racial injustice and the effects of a worsening global pandemic, Omaha buyers rallied together to show the spending power of the black community and support black-owned businesses.

Dripped and Draped, a local black-owned coffee shop and boutique in Benson, has been at the forefront of Omaha’s movement to empower its black citizens, and consumers in Omaha have reciprocated well. For the owners of Dripped and Draped, Vanelle Littrell and Vandra Caldwell, having a black-owned business in Omaha was not all about selling coffee and boutique clothing, but about spreading awareness of black-owned businesses, adversity faced by the black community, and empowering the citizens of Omaha to spread their messages of justice and reform. However, their mission was jeopardized by the increasing spread of COVID-19 and emerging policies and restrictions regarding business practices during the pandemic. Only a day before Dripped and Draped opened, a State of Emergency was called, and opening day was extremely slow for the new business. Ultimately, its owners decided to close for a few weeks until business could resume under better conditions.

As protests heightened and the movement for racial justice and police reform ramped up in Omaha, Dripped and Draped was met with booming support as it reopened. Those who stood for the empowerment of black lives realized that their money makes a huge difference in majority black communities, and it is important to support black-owned businesses in these communities as much as possible. For Dripped and Draped, the huge amount of support from Omaha buyers has brought their business closer to financial stability amid a pandemic which has been extremely harmful to small businesses, and the owners now have goals to donate more of their proceeds to local nonprofits in their community. Dripped and Draped is just one of many black-owned businesses that have welcomed the support of their local community with the common goal of empowering black lives and voices.

Big Mama’s Kitchen and Catering is a black-owned restaurant serving handmade, family-recipe soul food in North Omaha. The business, initially based out of a cafeteria in a former school for the deaf, faced significant financial struggles in its early beginnings. Its owner, Patricia “Big Mama” Barron, had a lifelong goal of owning a soul food business in neglected North Omaha, and at 62, she traded retirement for the opportunity to live out her dream. The business struggled in the beginning, and Patricia kept the doors open by securing loans from the government and a local small business group. Early in its lifetime, Big Mama’s Kitchen and Catering received some buzz from an appearance on Food Network’s Diners, Drive-Ins, and Dives,” but the business continued to struggle until recently. As Black Lives Matter protests sparked in Omaha during the summer of 2020, the outpouring of support for black-owned business received by Dripped and Draped also reached the doors of Patricia’s restaurant. The restaurant was packed for weeks at a time, and all the support received allowed Patricia to return the support to her community by donating meals.

For starters, more and more Omaha citizens started to realize the economic power and importance of the black community and black-owned businesses, as minorities are poorly represented in markets across the United States. The spending power of unified buyers brings spending power to neglected communities such as North Omaha and to those who face adversity because of the color of their skin. Additionally, simply sharing and spreading awareness for black-owned businesses allowed black business owners and activists in Omaha to spread their demands for racial justice and police reform in the United States. Black-owned businesses in Omaha have continued to see increased support from their communities, and North Omaha has seen significant growth trends as of late. The support for black-owned businesses and the spread in activism across Omaha shows the ability of the citizens of Omaha to unify towards a common goal and empower the lives and voices of one another.