Bringing the Juneteenth Celebration to Omaha 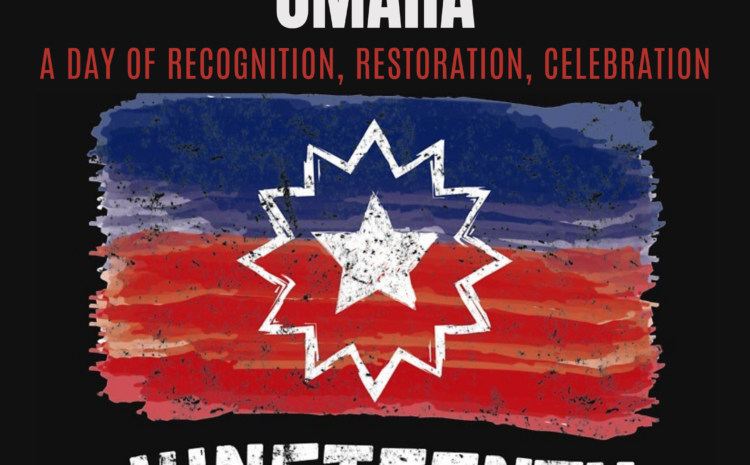 By: Daniel Flores, A Student at the University of Nebraska at Omaha, as part of Heather Nelson’s Service Learning Academy class.

With the month of June just around the corner, here is a quick background on a special celebration taking place and how you can participate within the Omaha area.

You might be thinking, what other holidays are celebrated the month of June besides Father’s Day? Well, there is actually an underappreciated holiday called Juneteenth also known as Freedom Day. The Juneteenth holiday celebrates the emancipation of African Americans from slavery in the United States. The name Juneteenth comes from combining the words June and nineteenth which was the declared for celebration of that action.

If it’s a holiday, then why have I not heard of it? Juneteenth has been around for many years including throughout the Nebraska area. Omaha was a white-controlled media, so it was rare back then to even hear about any commemoration event. It was not until 1863 when Nebraska abolished slavery that is, a year before President Lincoln issued the Emancipation Proclamation. This was a time when certain races had freedom and when it was granted, the states were furious about the Emancipation Proclamation being granted. Understanding the history and how it affects us today is important especially now more than ever. In case you missed it, slavery is still legal in Nebraska(https://www.ketv.com/article/nebraska-slavery-amendment-to-appear-on-2020-ballot/26750377) as it allows prisoners to work unpaid labor as a punishment for crimes. A call for change was made last year in the voting ballot allowing Nebraska voters to decide whether to stop that punishment or not, which resulted in no change. Think about it for a minute, this was hundreds of years ago and in comparison to recent years there has been more civil rights advances but its arguable that it’s not enough.

Since 1864 when Lincoln declared the emancipation, it took Omaha about 30 years to celebrate but progressed over the years. Omaha has been celebrating since 1893 up until the most recent in 2019 celebration. The Omaha NAACP (National Association for the Advancement of Colored People) has played a huge part in spreading awareness the city’s Juneteenth celebrations. Over the years, several organizations throughout North Omaha have sponsored and participated in Juneteenth celebrations in order to spread awareness. However, Omaha still has no historical marker or celebration for Juneteenth.

Juneteenth is an important holiday because it shines light on the end of a cruel and inhumane time. This holiday also provides awareness and revealing history that everyone deserves to know about. In order for us as a society to progress we must continue to educate ourselves on the history and cultures around us.

Although it’s not a talked about holiday, the Omaha area is bringing awareness this year with an exciting festival planned for the summer. Thanks to Freedomtainment and their team an Omaha Freedom Festival celebrating Juneteenth will take place this June 2021 at the Malcolm X Birth site. The event will include a festival and concert. Their mission is to educate, empower, and entertain the community while bringing awareness to African American Culture, local social, and business resources. Creating this event allows the Omaha community to celebrate black culture and honor their history. As we know in current conditions society has been limited to attending social gatherings which is why they have taken precautions for the event. For more information regarding guidelines and event details please visit the Omaha Freedom Festival(https://omahafreedomfestival.com/) website.

The background information of the history of Juneteenth within the Omaha area was provided by Adam F.C Fletcher from his article “A History of Emancipation Day and Juneteenth in Omaha” published April 17,2019.