Redlining: A Brief History of Homeowner Segregation in Omaha 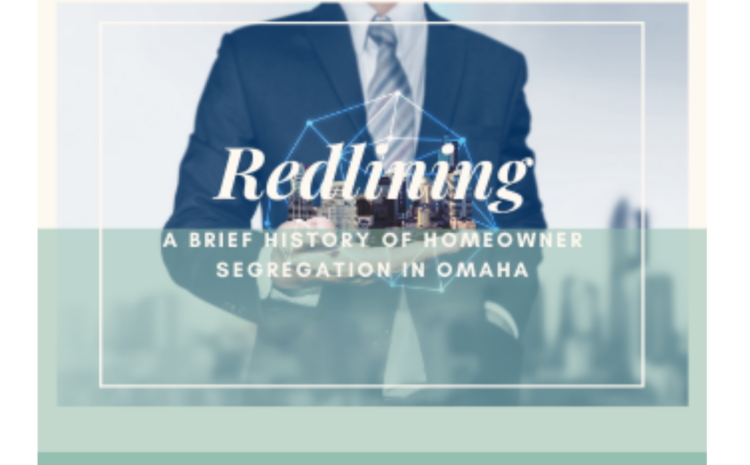 Becoming a homeowner has been one of the major steps to achieving the ever-elusive American dream. This dream rings true for many of folk across multiple generations. It’s a goal even most modern-day Americans strive for, but that dream hasn’t always been attainable for every ethnic group or culture in our metro area. At one point in time, a malicious act that was dubbed “redlining” divided the American people from each other. For those of you who might not know what redlining is, here’s a quick TL;DR summary. Redlining is where financials (banks/credit unions) or individual agents deny a client financial the backing to purchase a home in a certain area/discriminate what area of town they can move into due to whatever their ethnicity or culture is. This was a very common practice throughout the entirety of the united states until it was made illegal in 1968 with the Fair Housing Act. Unfortunately, this extremely predatory act has wielded its dreary head in Big “O” in its past.

Recently, I read an article from Adam Fletcher on his website, North Omaha History. As a self-proclaimed real estate buff, I found the be absolutely intergang! Like most American cities, Omaha has an unfortunate history of racial segregation/racism. Adams article did a fantastic job at presenting this information in an intriguing/educational way that I absolutely loved! This article began by discussing the trials and turbulations that the early new world settlers from the 19th-20th century coming to the new world to escape whatever problems their home country had. These people conceded of Italians, Irish, Czechs, Polish and Greeks. A hate group called the “Omaha Claim Club” formed in an attempt to scare off the new “undesirable” settlers. Adam described that they would burn their homesteads, lynch, among multiple other things to scare off the new settlers. These hateful acts eventually started happening to the African American community as they began to migrate to the western part of the United States from the south.

Omaha’s African American community was redlined into staying within the North Omaha area. This was put into place as an attempt to segregate the different cultures in the metro area and to prevent any African Americans from taking jobs in the main community. Despite them being forced into isolation, the North Omaha community ended up thriving fairly well at times. but there where definite times where the community struggled without aid. During the 1913 Easter Tornado, local North Omaha businesses, homes, and churches were in shambles. Little to no aid was provided by the state. Restrictions were also placed on local home developers that forced then to comply with segregations guidelines. Both of these events ended up causing a bigger divide between all the communities in the metro area. Tenses began to grow even more after World War II. This was when the when the black community became more vocal about the blatant use of redlining within the community and were wanting to integrate with the rest of the area. Eventually, redlining along with most other forms of segregation within the metro area thankfully came to an end. Commencing a huge step forward in progress.
As we move on to the modern day, North Omaha is a thriving part of the metro area. New projects are popping up all over the place! Just last year, The Omaha World Harold reported that plans were made by Bluestone Development for the construction $30 million dollar apartment complex to be built in North Omaha. It’s also hosts events that present their wonderful culture. Such as the Juneteenth Omaha Freedom Festival that takes place on June 19th! A free, family friendly event that is hosted at the Malcom X Memorial Foundation outside the Amphitheater! This is just one of the many examples of North Omaha and it’s ever-growing community and culture.