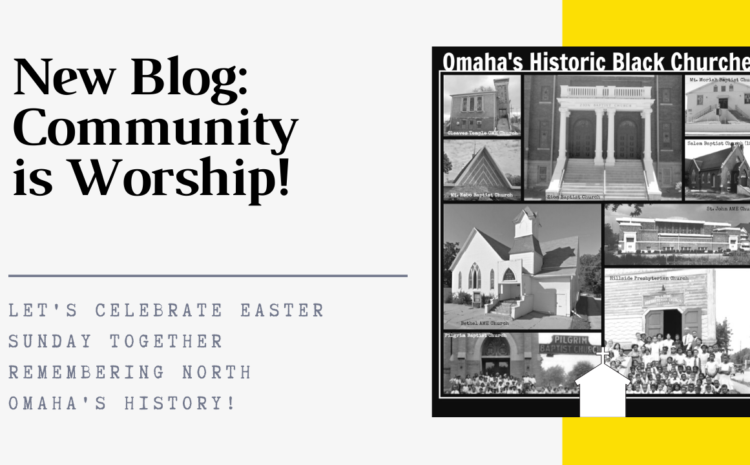 By: Connor Mockenhaupt, A Student at the University of Nebraska at Omaha, as part of Heather Nelson’s Service Learning Academy class.

Religion and worship is a high priority within the African American culture. It was not long after Omaha’s founding in 1865 that African American churches were on the rise. When they were denied access to White churches, they created their own!

Since the 1910s, the population of Black churches has been in proportion to Omaha’s population. Over many years, these churches have worked together and separately to spread faith, advocate for civil rights and transform their communities.

One of the first African American churches in Omaha was St. John’s African Methodist Episcopal Church, which was founded in 1865.

St. John’s hosted many activities. They started the “Good Neighbor Homes” project in the 1930s, which provided homes for 120 families. They hosted the NAACP Youth Council in the 1950s and 60s. They are also well known for being one of the founding churches of the Union Services. St. John’s acted as an essential pillar of the activity by often hosting, providing resources, and promoting Union Services to its large congregation.

The Goodwill Spring Musical Choirs in 1938. Founded by L. L. McVay. Courtesy of the Durham Museum.

According to Adam Fletcher Sasse, “In 1938, a small group of Methodist ministers decided to hold annual inter-denominational services among Omaha’s Black churches. The Union Services happened Sunday evenings from January to April through the late 1950s.” There were multiple congregations involved, and the attendance of these events ranged from 700 to 1000 people. This event was a great way to bring the community together. Everyone was able to come and have fun, giving nothing but praise to the Lord.

Even though denominations would fight one another to attract members to their churches, these services’ spirit has become a metaphor for Black churches and North Omaha. Adam concluded with the analogy, “When one succeeds, everyone succeeds. When one is challenged, everyone is challenged.”

Church and worship will always be a vital part of North Omaha culture. When African Americans were discriminated against and alone, together, they created their community through worship. Now, they belong somewhere together where they will not be discriminated against but instead loved because they join together in God’s house. Worship will always have a significant role in North Omaha, and that is why more need to learn and experience these wonderful traditions.