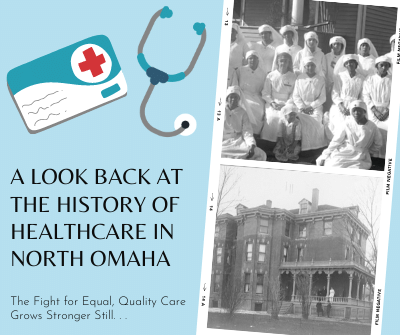 By: Cora Gillespie, A Student at the University of Nebraska at Omaha, as part of Heather Nelson’s Service Learning Academy class.

In the midst of this pandemic, conversations regarding healthcare have taken over household discussions and media sources. COVID-19 has affected the lives of millions of people around the world and here in the city of Omaha. The University of Nebraska Medical Center has provided care to countless patients suffering from this horrible virus. While healthcare is more widely available today, past discriminations and injustices still continue to affect the level of care provided to people of color. Omaha is no exception to these injustices. To fully understand how Omaha healthcare is still affected by discrimination, we must take a look into the history of healthcare for African Americans.

Just like many other facilities during the late 1800s and early to mid-1900s, hospitals were segregated. Omaha was de facto segregated for over 75 years, causing thousands of Black citizens to be denied necessary healthcare. In fact, nearly all hospitals in Omaha would only take a handful of Black patients. Notable hospitals that refused to accept Black patients included Creighton University Saint Joseph’s, Immanuel, and Methodist. The Black community of North Omaha was in desperate need of quality healthcare, and African American physicians were ready to make it happen.

Black doctors, as well as Black Nurses, were not allowed to practice medicine within white hospitals. This meant that if their patients were admitted to white hospitals the patient would be assigned a white doctor as soon as they arrived. Black doctors weren’t able to care for their patient anymore and lost any fees that were due. The solution to this issue? Opening hospitals for African Americans in Omaha.

Mercy Hospital (c1919-c1924) was one of the first hospitals for African Americans. This hospital, and the People’s Hospital (1948-1953), cared for Black communities throughout Omaha. Other healthcare facilities that served African Americans included the Negro Women’s Christian Home (1915-1937) and the Charles Drew Health Center (1984-present).

On 24th and Parker sat Mercy Hospital. This was the first Black hospital in Omaha and was started by Dr. Roscoe C.Riddle. The hospital was able to successfully operate for five years before closing in 1924. The Negro Women’s Christian Home was another facility that provided care to African Americans during the early 1910s. This facility was later renamed the Martha T.Smith Home for the Aged and operated for more than 50 years. Adam Fletcher details the history of this facility in his article titled A History of the Negro Old Folks Home.

In 1945 there was a plan to build Provident Hospital, a segregated hospital. The Nebraska Negro Medical Association envisioned a Black hospital that would provide the level of care that African American communites desperatley needed. Dr.Craig Morris, DDS, led the the Nebraska Negro Medical Association in executing the plan to build Provident Hospital. Sadly, the hospital never openend.

Several African American physicians were determined to provide excellent care for Black communities. The first African American doctor in Omaha was Dr. W.H.C. Stephenson in 1876. His practice was referred to as “eclectic” by the public. Dr. Matthew Ricketts was the first regular African American physician in 1884. Stephenson soon followed in his steps to boost his statue as a medical professional. Stephenson and Ricketts paved the way for other Black physicians to provide care here in Omaha. In Adam Fletcher’s article History of Segregated Hosptials in Omaha, Fletcher lists a total of 27 Black healthcare providers that provided medical attention when others wouldn’t.

Today, the fight for quality healthcare in North Omaha is ongoing. Freedomtainment expressed just how difficult it is for Black communities to get necessary healthcare even now in 2021. Their website states that “over the past few months, Black people everywhere have been trying to survive COVID-19’s devastating attack on our communities while processing layers of generational and personal trauma shaped by race-related stressors such as economic inequality, police brutality, criminal injustice, and more.” Freedomtainment seeks to educate the public about the North Omaha community, its history, and the ongoing fight for improvements in the community.
To celebrate the achievements of Black people in North Omaha, Freedomtainment is hosting a Freedom Festival on June 19th, 2021. This Juneteenth festival will highlight the accomplishments of the people in North Omaha, provide educational opportunities to learn about the rich history of North Omaha, and organize activities to immerse the community in African American Culture. Education, Empowerment, and Entertainment are at the core of Freedomtainment’s purpose. The Freedom Festival will take place at the Malcom X Memorial Foundation in North Omaha.