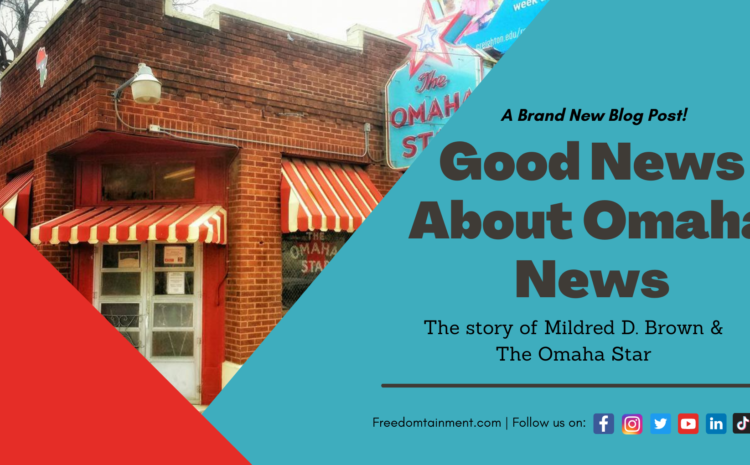 By: Owen Finn, A Student at the University of Nebraska at Omaha, as part of Heather Nelson’s Service Learning Academy class.

When someone says the word “news” what comes to mind? Maybe you conjure up an image of a sensational high-speed car chase. Maybe you think about phrases like “fake news” or “media bias.” News specifically seems to have a knack for focusing on the negative side of what’s going on in the world. CNN Senior Political Analyst Gloria Borger eloquently addressed this when she said, “For most folks, no news is good news; for the press, good news is not news.” However, there are also occasions when the news unites a community and shines a light on the accomplishments of its people. An outstanding example of the best kind of news is headquartered in Omaha, NE, and has been serving its African American community for over 65 years. It is The Omaha Star Newspaper. The following information was taken from an article about The Omaha Star from an author named Adam Fletcher. Fletcher is a writer and author of North Omaha History, a website that provides extensive historical information about the people and places of North Omaha.

The newspaper, which printed its first edition on July 9th, 1938, was cofounded by the husband-and-wife team of Mildred Brown and S. Edward Gilbert. Their goal was to create a news source that focused on sharing positive messages and celebrating the accomplishments of Omaha’s African American community. Shortly thereafter, Edward and Mildred divorced.  Edward moved to St. Louis and Mildred took complete control of the paper. Although Mildred was alone, she was instrumental in making The Omaha Star reach two milestones by the end of the 1940’s. First, it was the only remaining African American newspaper in the city of Omaha. Second and more impressive was the fact that The Omaha Star was the only newspaper in the U.S. to have been founded by an African American woman. With Mildred at the helm, the up-and-coming paper was starting to make a name for itself. In the two decades that followed, Mildred Brown solidified the role of The Omaha Star as a beacon of truth and positivity for the city of Omaha.

As the 1940’s came to end, Mildred Brown and The Omaha Star newspaper became heavily involved in The Civil Rights Movement. During the 1950’s, the paper gained national recognition for writing about the perspectives of the Omaha African American community regarding local and national news. Additionally, when Creighton University chose to ban The Deporres Club, a student group that pushed for equality, from meeting on campus, Mildred went out of her way to assist them. Brown offered to let The Deporres Club use the newspaper office as a meeting place and provided coverage on the group’s activities. By the 1960’s, Mildred and the paper’s reporting of civil rights issues led to her winning several national awards. Two of these awards included receiving the NAACP’s “Unsung Heroine Award” and being appointed as a goodwill ambassador to East Germany by U.S. President Lyndon B. Johnson. Mildred Brown continued to report about civil rights and the African American community of Omaha until her passing in 1989.

If you were to visit 2216 North 24th Street, you’d see that very little has changed about The Omaha Star. The newspaper, which distributes roughly 30,000 copies bi-weekly to 48 states, continues to act as a voice for the African American community of Omaha. In fact, the only real difference over the years is in leadership. After the death of Mildred Brown, control of The Omaha Star newspaper shifted to several people. During that time, two of the leaders worked to form the Mildred D. Brown Memorial Study Center. This is a nonprofit that carries on the legacy of Mildred Brown and the impact she made on the community.