The Senator In Short-Sleeved Sweatshirts 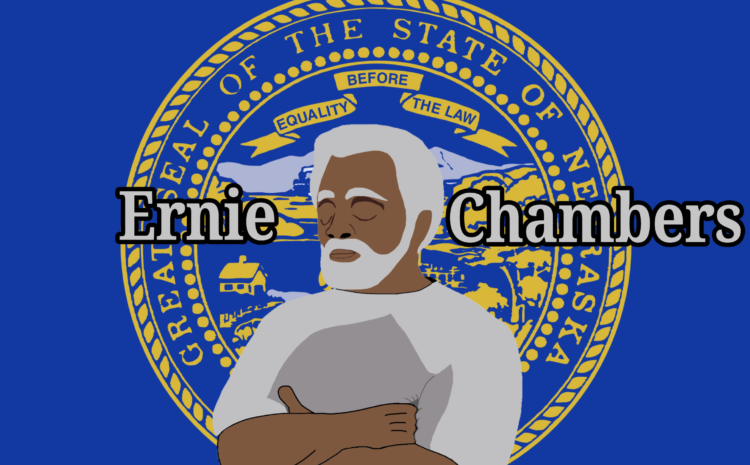 By: HAM, A Student at the University of Nebraska at Omaha, as part of Heather Nelson’s Service Learning Academy class.

The Senator in Short-Sleeved Sweatshirts

Having represented North Omaha’s 11th District for 46 years, former Senator Ernie William Chambers has left a positive impact within the lives of his constituents. Mr. Chambers is often easily recognized through the Capitol building by wearing jeans and a sweatshirt in a sea of professional attire. At the ripe age of 83, he continues his push for equality and progress despite being illegible to run again due to term limits. Though for those who may not be invested in politics, who is Ernie Chambers? That’s precisely what I am here to inform everyone and share some interesting facts that may not be commonly known to those that know about him.

A Man of The People Local and Abroad

Senator Chambers wasn’t a one of kind politician, he shares similar values that others such as Senator Bernie Sanders of Vermont have on social equality. Both being a longtime supporter of desegregation but also supporting anti-LGBT discrimination policies. From a local level of challenging the segregation that Omaha Public Schools once had to the federal level of giving minorities a voice with district-based voting. By doing this not only has he given a voice to the voiceless, but he has shown time and time again that it’s a grassroots movement that truly can bring forth change.

This next part is something I personally had discovered from a TED Talk by Mark Gudgel, a currently running Mayoral Candidate for the city of Omaha. In South Africa there was an apartheid taking place which in layman’s terms it was just institutionalized segregation against the non-white citizens of the country. Though what business does the US, more specifically a land-locked state like Nebraska have to do with them? It started when Ernie Chambers learned news that the University of Nebraska had received a gift of about 1,300 South African Krugerrands according to Michael Kelly, a columnist for the Omaha World Herald.

When news of this reached then Senator Chambers, he urged Nebraska Legislature to be the first state in the entire United States to divest from South Africa. Granted that alone he cannot accomplish much, but within the following four years five more states followed his lead imposing sanctions to confront the apartheid. This is a story that is truly worth mentioning to merit the power that we as Nebraskans, born here or not, can have a positive impact to those around the world. It’s not a matter of making change overnight, but in unison achieving a morally beautiful goal that can rid the world of senseless discrimination.

Occasionally we believe that the battle against prejudice and discrimination is over with but that is far from the truth. Ernie Chambers has and will continue to fight for a better society and it’s important that we as a new generation of civil rights activists carry out this legacy. For one, it’s important to not forget our history, however, it’s a necessity that we celebrate our victories. Juneteenth is celebrated for the emancipation of slaves shortly after the civil war. Instead of looking at the dark past of humanity, we should hold our heads high in celebration of what we’ve accomplished, and what we can continue to accomplish with the power of our voices. Ernie Chambers through his initiative as a Nebraska State Legislature brought forth progress for not only Omaha but abroad as well. With that in mind what is something that we, the new generation can do to continue this trend of peace and equality?