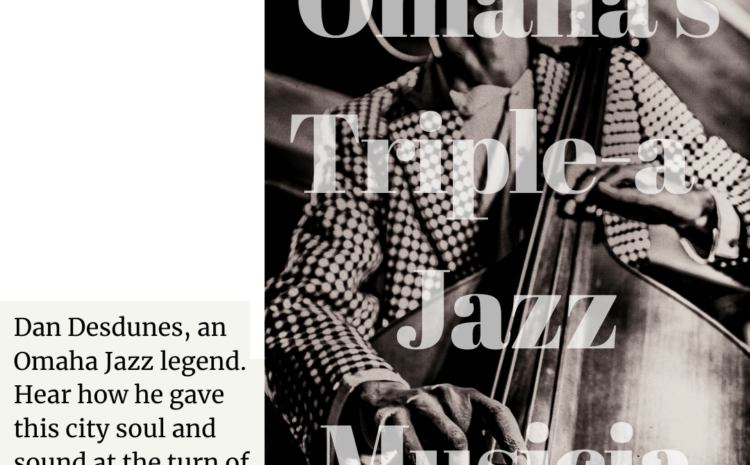 It is thought that Omaha has been largely neglected in the role it played in the Jazz era during the first half of the 19th century while major cities have taken the credit for the entire genre’s relevancy. Preston Love, an Omaha jazz musician refused to accept this as truth and claimed proudly, “If New York, Chicago and Kansas City were the major leagues of jazz, Omaha was the triple-A. If you wanted to play the big leagues, you came and played in Omaha.” He and others have accredited this to Dan Desdunes, a New Orleans Civil Rights Activist and “The Father of Negro Musicians of Omaha”.

Born in New Orleans in 1873 to a middle-class family, Dan was the son of Rudolphe Lucien Desdunes. Rudolphe was an established member of the community who played a large part in civil activism by orchestrating the Comité des Citoyens (Citizens Committee) and sitting as the primary editorial contributor to The Crusader, the weekly Black newspaper. He was a massive opponent to segregation and demonstrated it as the 1890 Separation Car Act came into effect. Railroad cars were set to be whites or blacks only. Anyone who defied this was to be physically removed from the train. The Comité des Cioyena challenged this law until 1892whenn they and volunteer, Dan Desdunes, violated this act directly.

Sometime after Dan went on to pursue a career in music which may have differed from his father’s lifelong work in civil activism but would ultimately allow him to continue in his father’s footsteps. After getting his college degree as a classically trained musician, he began performing and teaching music in New Orleans. Desdunes took part in the first waves of Jazz and swing before leaving on tour with the Dostader’s Minstrels in 1890. It was on this tour through the Midwest that Dan found Omaha.

Desdunes worked as a manager of billiard rooms at the Omaha Chamber of Commerce until being recruited by the Colored Knights of Pythias Orchestra. After playing with them for some time, a group known as the Omaha Military band asked if he would like to be their director. He accepted and it didn’t take long for the group to be known as the Dan Desdunes Band (Later known as the First Regimental Band). The man arranged most of the music they played and had a talent for convincing touring musicians to join the band. Due to his time at the Chamber of commerce Dan was able to land the band a spot on their annual “Good Will” trips. They were such a hit they became the official band of the trip. Desdunes became a celebrity of the Omaha community and got to play for many prominent people when they came to town including President Woodrow Wilson.

In 1917 Dan Desdunes began playing what would become a massive role in History of Boys Town, the home for troubled male youth founded by Father Flanagan. The home was integrated and sparked his interest. He became a music teacher and volunteer band master where he trained many of the boys to perform in a traveling minstrel show. The group helped the boys earn a living as well as changing the societies opinion/ prejudices toward them. By 1922 they had a 32-piece band that went on tour. They became so popular that the tours were expanded into other regions of the country as far as the Pacific Ocean. Desdunes put his heart and soul into helping these young boys. He composed many famous arrangements for them to help them pay off the mortgage and gave them numerous connections so that they might continue playing. He was involved with Flanagan’s Boys Town until 1929 when he died of spinal meningitis at the age of fifty-six. His death was a huge blow to community, but his life achievements had changed it forever and it would be long before anyone forgot Dan Desdune.