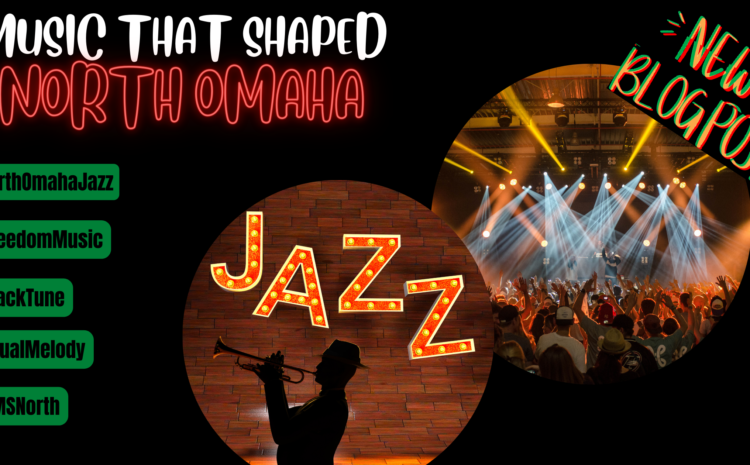 By: Chakera J. Hough, A student at the University of Nebraska at Omaha, as part of Heather Nelson’s Service Learning Academy class.

Music has always been a form of expression that people have used to escape the reality of the real world. Getting lost in the rhythm of a song seems to be a form of healing for many people, especially the African American residents of North Omaha. The beautiful history that shapes the music of North Omaha has been enriched by African American culture for over 170 years. From jazz bands to church choirs, to orchestras, and much more, the power African Americans have had in the musical industry has and will continue to change the world we live in.

The Musical History That Sparked A Change

The musical history that has shaped North Omaha began during the Great Migration (1910-1920s), which increased the population of African Americans from about 5,000 to over 10,000. This migration was the spark that ignited the music scene in North Omaha. The start of this spark led to the formation of the National Orchestra Service. This service managed and integrated territorial jazz bands. These jazz bands traveled the entirety of the Midwest, playing for white audiences and often skipping towns primarily populated with African Americans. These musicians were instructed to avoid black towns. They were also extremely underpaid even though companies like the National Orchestra Service and others made vast amounts of money off of them.

After the music boom swept through the Midwest in the 1930s, the federal government decided to invest in North Omaha’s music scene. This was portrayed through the Federal Emergency Relief Administration. They formed the Negro Orchestra, which played the Dreamland Ballroom during the Great Depression, while also forming various other projects as a part of the Works Progress Administration. These efforts were made to “aid” musicians. Still, most white listeners would simply come for the music and then leave immediately without engaging in other economic activities like lodging and dining.

The Impacts of Black Leaders

The listed African American musicians above were key players in the progression of music in North Omaha. To start off this list, George Franklin McPherson was the “leading pianist of the African American race.” He graduated from various music schools in Europe and is considered the first prominent black musician in Omaha. He was a musical genius who ran a music studio for wealthy white students and African American students. His music and expertise moved people regardless of the complexion of their skin. Later in his life, he was committed to a mental asylum in Chicago and then shortly after committed to the Ingleside Hospital for the Insane in Hastings, Nebraska. Even while being committed to an asylum, he continued to perform.

Another African American musician that has played a monumental role in North Omaha’s musical scene is Flora Frances Pinkston Mitchell. Flora was a graduate of the New England Conservatory of Music in 1916 while also doing various studies at the Paris Conservatoire of Music. Flora was the most popular and established musical teacher in Omaha. It is said that Flora “has made the largest contribution in the field of music through her school of music, which she successfully conducted for a quarter of a century.” The entire community of North Omaha has gained substantial knowledge through her cultural contributions. Flora taught music for over 60 years and opened the Pinkston School of Music. She did pass away in 1966, and today her family’s home still stands at 2415 North 22nd Street.

In addition, Preston Love Sr. (1921-2004) is one of Omaha’s most impactful musicians. He was a bandleader for a large part of his life, but he caught his break by playing with the Count Basie Orchestra from 1944 to 1947. He continued his growth by becoming the leader of the Motown West Coast band in the 1960s and 1970s. He played with some of the most well-known bands, including the Supremes and the Temptations. Later in Love’s life, he published, A Thousand Honey Creeks Later: My Life in Music from Basie to Motown―and Beyond. This book gave insight into what it was like growing up in North Omaha during the jazz scene. He continued by working for the Omaha Star and wrote about the history of jazz in the Omaha World-Herald. After his passing in 2004, Omaha opened Love’s Jazz and Arts studio at 24th and Lake to honor his contributions, although it closed in 2019. As of 2022, the North Omaha Music and Arts organization is opening a new academy of dance in Love’s former studio.

There has been an extreme difference between equality with African Americans and music in North Omaha due to the changes and steps made by various black leaders. Even with Jim Crow laws lasting until the 1970’s many musicians took their voice and abilities to the next level and sparked a change that has made Omaha the place it is today. Even as music continues to change from jazz to hip hop or from classical to rock, there will always be a strong North Omaha community that continues to grow and stand for equality on all platforms. The musical scene in Omaha is forever changing, but the roots will always remain the same.