The Missing History Of North Omaha 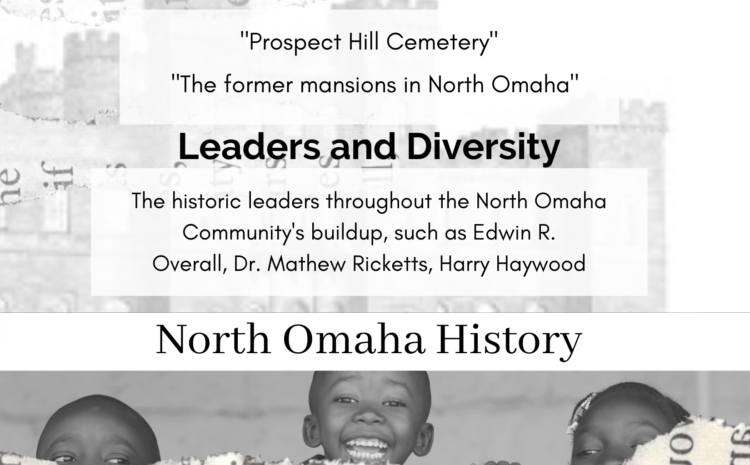 By: H.A., A Student at the University of Nebraska at Omaha, as part of Heather Nelson’s Service Learning Academy class.

What is really happening in that area? Is there anyone living there? If yes, What is their culture, their history, or their lifestyle? North Omaha is an exciting culture full of life and deserves to be known. All the people in Nebraska should know about the important history there. As I was reading through Adam Fletcher’s article-  an amazing author writing unique articles about North Omaha culture- I found an article that describes how the north Omaha community was found and where the historical sites are exactly located. North Omaha is a fabulous place; according to Fletcher,” above the river was a prairie that looked more like an African savannah than the “oceans of grass” white settlers later reported. Dotted with oak trees and plum thickets, there were bison and elk, bear and cougars roaming freely throughout the area that is North Omaha today “.

Moreover, There is  another exciting thing that grabbed my attention was the city’s pioneer cemetery “Prospect Hill Cemetery”, where most African Americans were buried. Filcher wrote the exact address of the Cemetery and he also described what surrounds the cemetery. What a great and ancient cemetery that contained the souls of everyone who build the core of North Omaha; it deserves to be visited in order wish everyone’s souls to rest in peace; if you want more information about this great cemetery, you will find everything you need to know to enrich your knowledge in Adam Filcher’s Article.  North Omaha has an eventful history; you have the right to know it,  people have the right to know it, and the coming generation has the right to know it; That history should not be buried. Adam Filcher shows some of the former mansions in North Omaha ; Adam Filcher displays an old photo of the houses of the rich people in one of the neighborhood Of north Omaha Filcher. The houses were built in an impressive and antique style.

In addition, Filcher mentions the ethnic Groups there; I am sure you will be surprised with all the diversity over there as Filcher says ” The history of North Omaha unfurls from there: A cacophony of ethnicities including Scandinavians and Jews, blacks, Germans, and English flood the neighborhoods, Fort Omaha grew, and Indians left the area after a notable trial while Irish immigrants lived in dugouts on the old plain”. Furthermore, the author mentions some of the fantastic and historic leaders throughout the North Omaha Community’s buildup, such as Edwin R. Overall, Dr. Mathew Ricketts, Harry Haywood, and many great men have challenged the area to be better than before. Furthermore, Filcher explains in his article the New Negro Movement and how it gives the community a beautiful interpretation.

To sum up, north Omaha is a great community full of historical things built and made by great men who dedicated their lives, time, and effort to build to create them. Never ever miss the chance to know their enormous history!