What’s the Deal with Bemis Park? 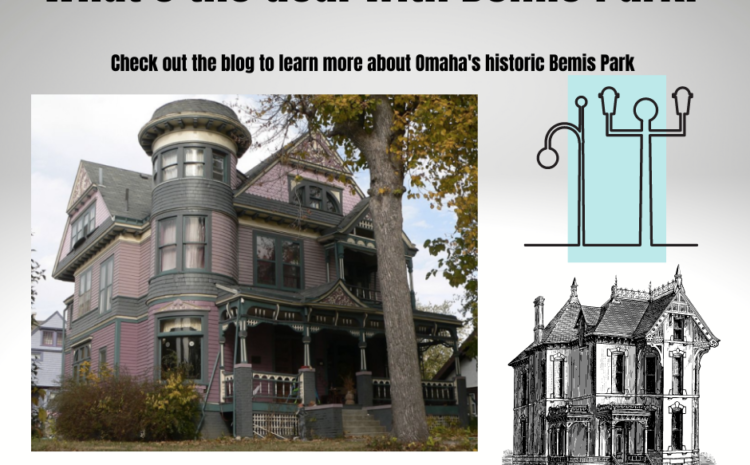 By: Nate Beacom, A Student at the University of Nebraska at Omaha, as part of Heather Nelson’s Service Learning Academy class.

What’s the deal with Bemis Park?

Bemis Park goes back to Omaha’s first mayor, Jesse Lowe, who owned the plot of land. In the late 1800’s, George Bemis, a real estate mogul, constructed homes for some of the Omaha elite. One of the first homes built is the famous Edgar Zabriskie Mansion. These houses were built for lawyers, doctors or whoever could afford the high prices at the time. These houses were a status symbol.

Bemis’s neighborhood was solidified as a permanent fixture of Omaha when it was annexed in 1887. Of course, it helped that our George Bemis became mayor during the same time period.

During the early 1900’s the neighborhood was still growing. Bemis park even withstood an Easter tornado in 1913.Despite the forces of nature, more homes continued to be built through the 40’s.

It’s important to note that Bemis Park historically has had race related covenants in place. These covenants were an agreement to keep certain areas “white” and certain areas “black”. This segregation was also aided by “redlining”, or denying credit based on race. This topic explained well in The Color of Law. I find this book to be a must read, especially for Omaha, a historically segregated city.

Some white Omahans fled the area due to the surrounding African Americans in North Omaha. This created empty houses which were partitioned into apartments by slumlords and poorly maintained.

In 1983 Bemis Park was designated a historical landmark and has been renovated to restore some of the beautiful historical houses.

If you have a spare afternoon and looking for something outdoors to do during COVID, then a walk through the Bemis Park neighborhood will be “a nice little treat”, as the kids say. In addition to all of the castle like homes, Bemis park boasts three different parks maintained by the city: Bemis Park, Mercer Park and Walnut Hill Reservoir. There are tennis courts, walking paths, picnic areas and shelters.